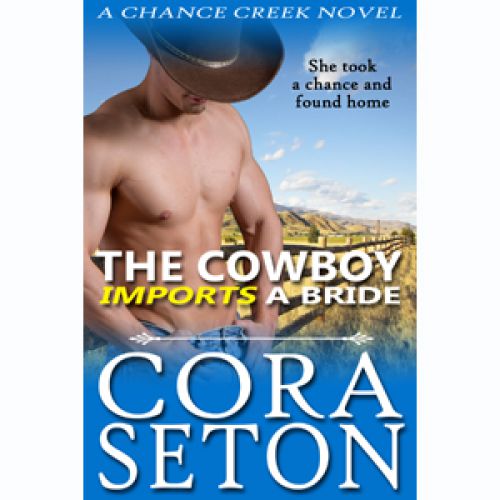 The Cowboy Imports a Bride is Here!

Now available in ebook and print format!
Rob Mathesonâ€™s a fighter. Flattening enemies with his fists or with his legendary practical jokes, heâ€™s a tough enemy, and a troublesome friend. But Rob doesnâ€™t know how much longer he can keep up the act. As his buddies get married one by one, heâ€™s left with his lonely life â€“ and the sinking feeling he lost more than his dreams when he traded them for a thick skin. Now Robâ€™s father has issued a challenge â€“ heâ€™ll give 200 acres of prime Montana ranchland to the first of his four sons to wed. No conditions, no meddling. Could this be a chance to become the man he really wants to be?
Morgan Tateâ€™s worked for years to climb the ladder to a top job at Cassidy Wineries, but Duncan Cassidy, the bossâ€™ son, always stands in her way. Now heâ€™s issued an ultimatum; marry him or heâ€™ll make sure she never works in the wine industry again. Morgan wants marriage â€“ and a family â€“ but not with Duncan. A certain cowboy in Chance Creek, Montana, has stolen her heart.
When Rob offers Morgan a proposition â€“ marry him and split the land â€“ they both find themselves with an ethical dilemma. They donâ€™t know each other well enough to wed, but they canâ€™t lie about their intentions before God and man, either.
Now theyâ€™ve got sixty days to fall in love, and a passel of family and friends determined to keep them apart. The victims of Robâ€™s previous jokes are lining up to get their revenge, and Morganâ€™s half-sister, Claire, is stirring up their motherâ€™s past.
Will it take the biggest practical joke of all to convince the world â€“ and themselves â€“ that theyâ€™re truly meant to be man and wife?
Buy From Amazon (Kindle)
Buy From Smashwords (all ebook formats)