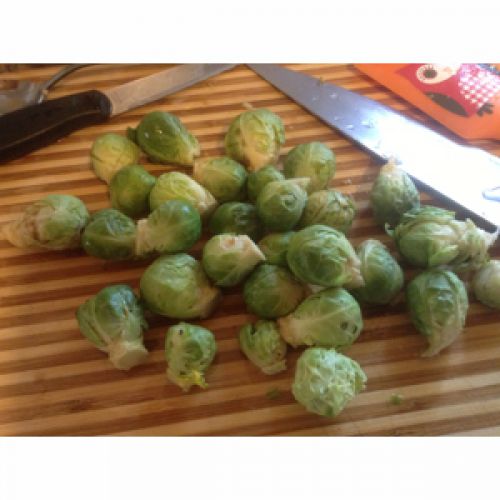 I love Brussels Sprouts, and as I’ve said earlier, I had no idea you could just grow them in your garden. I spent a decade in Santa Cruz, California, where farmers grow them on the cliffs beside the ocean up Highway One, and I’d always supposed it took that exactly climate to be able to grow them correctly.
Happily, I was wrong! They grow just fine in my own garden here in Northern BC. And to prove it, I harvested some, steamed them, slathered them with butter and dill, and ate them yesterday as part of a harvest day attempt to process (and eat) everything in my garden that was piling up. They were yummy. The only question I need to answer is that they’re supposed to be harvested after a frost, and there’s no way the ones I picked yesterday would make it that long. I either need to plant later, or do something differently. Or maybe freeze the sprouts before we eat them? Not sure, but will find out.
I also harvested a bunch of cayenne peppers off a plant we bought this spring at the farmer’s market. I guess I didn’t really believe they were cayenne peppers. I grabbed a handful, chopped them up and threw them into a homemade salsa I’d concocted to use us the cherry tomato avalanche, along with some onion, garlic, cilantro, and lime. I figured I’d take a scoop to try it out before packing it away until dinner. OMG, that was one of the hottest things I’ve ever tasted. Smoke coming out of my ears and everything. My daughter wondered why I was shrieking and hopping around the kitchen. I ate a piece of bread and butter and all was well again, although I don’t think my taste buds are quite the same yet. We’ll use that particular batch of salsa as a base for chili, and a base for spicy spaghetti, among other things. I think if we parcel the heat around a bit, we’ll be okay.
More cayenne chilis in hand, I used some local ground beef and potatoes to make empanadas. I love the way they turned out – the crust was flaky, and the insides savory. If I was on it, I’d post a recipe….:)