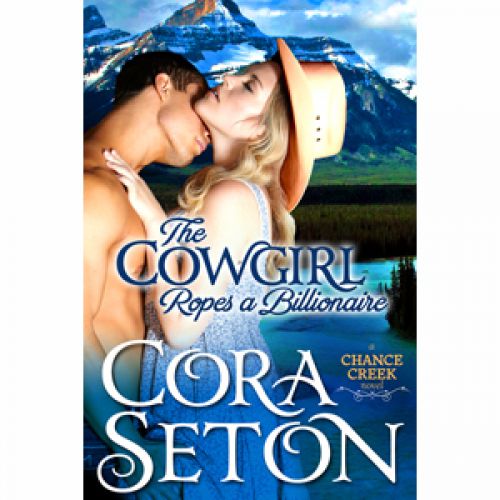 I’m so excited that The Cowgirl Ropes a Billionaire is up for sale now.
Here is the blurb:
Bella Chatham will lose everything â€“ her veterinary practice, her animal shelter, and even her home â€“ if she canâ€™t find another source of income, fast. So when her best friend signs her up for the hot new reality television show, Can You Beat a Billionaire, Bella accepts the challenge and hopes against hope she can win the ten million dollar prize. If she doesnâ€™t, itâ€™s bye-bye pet clinic and shelter, bye-bye Chance Creek, Montana, and hello to marriage to the billionaire for a year!
Evan Mortimer, billionaire, canâ€™t believe heâ€™s reduced to competing in a television contest to win a wife. Unfortunately, itâ€™s the only foolproof way to secure his position as head of Mortimer Innovations. At least heâ€™ll be able to dump his â€œspouseâ€ at the end of the year; heâ€™s much too busy to be tied down to a country bumpkin cowgirl.
Bella doesnâ€™t expect her adversary to be handsome â€“ or funny, or compassionate â€“ but Evanâ€™s all three, and heâ€™s proving a tough competitor, too. When they end up sharing a tent â€“ and a sleeping-bag â€“ her body betrays her with a longing so deep it cuts her to the core. Still, this cowgirl must stay strong. If Evan uncovers her secret fears, heâ€™ll use them to win the contest â€“ and then heâ€™ll own her for a year. Sheâ€™ll be out of luck, out of cash, and stuck being Mrs. Mortimer until he kicks her to the curb. Too bad she canâ€™t decide which is worse â€“ winning the show and losing Evan forever, or losing the show and only being his temporary wife.