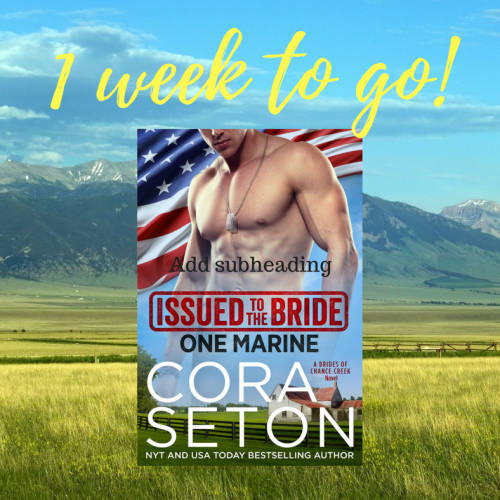 One week to go: Issued to the Bride One Marine

The countdown is on! One week today—on Tuesday, November 14—Issued to the Bride: One Marine will be unleashed to the world. (Psst… Have you preordered yet? Buy links are below.) Here’s a little excerpt to tide you over:

She looked him over. “Did you really come here to marry me?”

Logan nodded. What else could he do?

“And you thought you could actually do that? Marry someone you don’t know a thing about? Make a life with her—with me?”

He chuckled. “I know a thing or two about you, Lena.” When she scowled, he went on. “I know you love this land more than your own life. I know you’ve wanted to be a rancher since before you could walk. I know a man treated you wrong. I wish I’d been there to stop that. I know that if I could every prove to you who I really am, the two of us could have a hell of a lot of fun. You’re wild in the best of ways. You’re funny. You’re smart. You’re . . . amazing.” As he ticked off her qualities, Logan realized he really did know her.

Not as a conquest or a mission or anything like that.

Even without the General’s interference, if he’d met her in the course of his travels, he’d have fallen for her. And he’d have done his best to capture her heart. Lena was alive in the best of ways. A true match for a man like him.

“This is a strange situation. Stranger still because the man who’s trying to get us together is the one who’s keeping us apart. If your father hadn’t sent me—if you’d met me at the Dancing Boot one night and we’d played a game of pool, what would you have thought of me?”

An emotion flitted across her features before she schooled them into a frown. “I would have been pissed that you beat me,” she said flippantly.

But Logan’s heart lifted. He’d seen that emotion and knew what it was, because he felt it, too, all the time around Lena.

Can’t wait until Tuesday to buy your copy? Preorder it today: