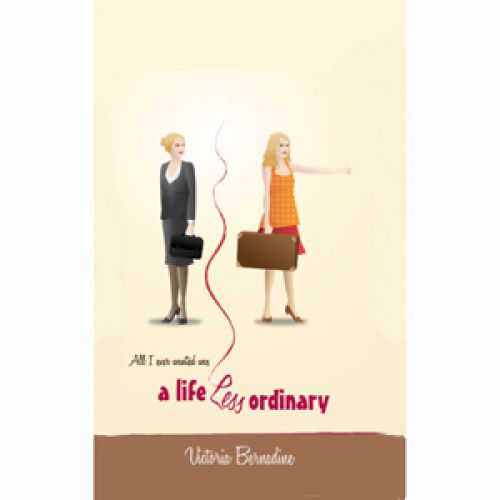 Today I’m hosting Victoria Bernardine’s blog tour for her novel, A Life Less Ordinary. Comment below for your chance at winning either a $25 gift card or one of two $15 gift cards to either Amazon or Smashwords!

For the last fifteen years, Rose “Manny” Mankowski has been a very good girl. Now, at the age of 45, she’s questioning her choices and feeling more and more disconnected from her own life.

When she’s passed over for promotion and her much younger new boss implies Manny’s life will never change, something snaps. In the blink of an eye, she’s quit her job, sold her house, cashed in her pension, and she’s leaving town on a six month road trip.

After placing an ad for a travelling companion, she’s joined in her mid-life crisis by Zeke Powell, the cynical, satirical, most read – and most controversial – blogger for the e-zine, What Women Want. Zeke’s true goal is to expose Manny’s journey as a pitiful and desperate attempt to reclaim her lost youth – and increase his readership at the same time.

Now, armed with a bagful of destinations, a fistful of maps, and an out-spoken imaginary friend named Harvey, Manny’s on a quest to rediscover herself – and taking Zeke along for the ride.

And here’s an excerpt:

Darius was very sweet and charming, just eighteen, but he couldn’t pay his own way, and Manny wasn’t about to support him for six months. He’d shrugged and accepted her decision with an adorable smile and she offered to call Daisy’s boss, Max, to see if he had any work that Darius could do. Darius had thanked her and even paid for their lattes, and they’d chatted for a good forty-five minutes before he’d finally gone on his way. Yes, he would have been a good choice–and she might change her mind if she didn’t find anyone before she left in two weeks.

You can always go by yourself.

I know. But it would be more fun with someone else.

Manny glanced at Harvey sitting in the chair across from her. He was dressed casually in jeans and a button down shirt open at the throat to show the strong lines of his neck and chest.

Harvey winked at her. Just checking.

She shook her head and Harvey blinked out of existence as the door opened and a darkly handsome man walked in. He paused in the doorway and removed his sunglasses as he glanced around the small room. Securely hidden in her corner, Manny considered him.

Tall; over six feet. Dark. Handsome, with large, dark eyes and full pouty lips. His black, tousled hair and dark stubble on his face gave him a sexy, scruffy appearance. He was slim, with broad shoulders, narrow hips and long legs encased in jeans.

I’ll bet he has a great ass.

Manny blinked at the man standing in the doorway and realized Harvey was right. Oh, they didn’t exactly look alike, but they had similar colouring, and a similar underlying confidence and arrogance in their stance. Probably something natural when you’re that naturally gorgeous, Manny thought ruefully, or, in Harvey’s case, that unnaturally perfect.

I’d almost be jealous…if I was real.

But you’re not–and he’s quite something. I wonder who he’s here to me…eeet.

A Life Less Ordinary is a fun, chatty, witty novel that really grabbed me the more I read it. While the novel mostly follows Manny’s roadtrip and Zeke’s attempts to maintain his professional distance while documenting it, there are also three other side stories about Manny’s sisters and Zeke’s bosses. Together, the different threads cover all sorts of ways life can sucker-punch you. Manny’s isn’t the only life that changes over the course of the novel; everyone involved has to overcome an unexpected problem and grow from the experience.

One side-story in particular – about a woman faced with raising her grandchild when her daughter proves incapable of doing so really resonated with me, and so did Manny’s story of reclaiming her sense of self and self-worth in the middle of being middle-aged.

I loved Manny’s banter with her invisible “friend” Harvey – by far one of the best parts of the book. I also liked the way Zeke struggled to even see Manny as a “woman” rather than as an “old woman”.

The one thing I wished had been added was more excerpts from Zeke’s blog posts, and I had the feeling that if the story had included two or three “blog readers” who “commented” each time he posted, the author could have added another fun and interesting subplot.

Take this one to the beach when you have a long, lazy day ahead of you!

Victoria Bernadine (a pseudonym) is, as the saying goes, a “woman of a certain age”. After twenty-something years of writer’s block, she began writing again in 2008. She began with fanfiction about a (now-cancelled) TV show called Jericho and particularly about the characters of Heather Lisinski and Edward Beck. From there, she expanded into writing original fic and she hasn’t stopped since.

Victoria enjoys reading all genres and particularly loves writing romantic comedy and post-apocalyptic science fiction. What those two have in common is anybody’s guess.

She lives in Edmonton with her two cats (The Grunt and The Runt). A Life Less Ordinary is the first novel she felt was good enough to be released into the wild.

Victoria can be contacted through Love of Words Publishing Inc. (loveofwords@shaw.ca) or through her brand new blog at http://victoriabernadine.wordpress.com/.