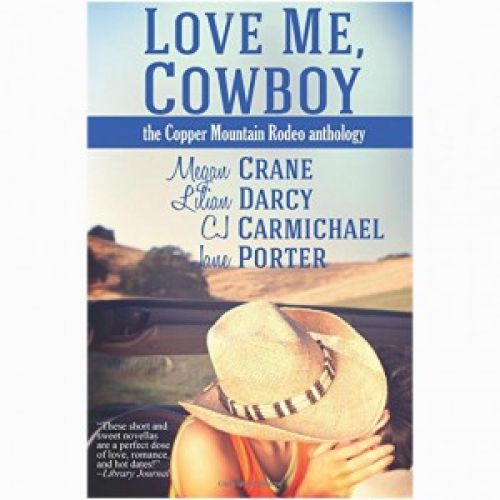 Today, I have a special treat for you all. C.J. Carmichael, author of Promise Me, Cowboy, is joining us to talk about cowboys and her must-read Carrigans of the Circle C series. She’s also offering a giveaway! Without further ado, here’s C.J.!

A lot of us love reading romance novels about cowboys. But what is a cowboy, actually? I’ve written about men who own, live and work on ranches—that’s one sort of cowboy, the Western legend cowboy who rides the range, works cattle and understands horses better than people.

There are also men (and women) who make their living working on the rodeo circuit. It takes a special breed of man to be a rodeo cowboy. You have to be tough, brave, hard-working, talented…and a little bit crazy. And that’s the hero of Promise Me, Cowboy—Dawson O’Dell—to a “T.”

Did you know most cowboys train just as hard as professional athletes? Proper conditioning and diet is also key—have you ever seen a chubby cowboy? It just doesn’t happen. Riding a bucking bronc or bull is tough enough without adding extra weight to the equation. Though I haven’t done any studies, a lot of the cowboys I’ve watched at rodeos or read about seemed to grow up in rodeo or ranching families, with early exposure to junior rodeos and practicing at home. My hero, Dawson O’Dell, is a bit of an anomaly here. He was raised by his mother Patricia, a lounge singer, who married six men and moved with Dawson at least that many times. It was her fourth husband—Earl—whom she met while gambling in Nevada—who first introduced sixteen-year-old Dawson to the sport. Earl had some land and horses, and he’d been the one to introduce Dawson to riding.

Dawson was immediately hooked and started saving his money to go to every rodeo clinic within driving distance. By the time his mother and Earl had split up, Dawson was on his own, working behind the scenes at the rodeo until he was old enough to sign up with the CPRA. So, it was a bit of late start for him, but it turned out to be his true passion.

Top cowboys, like Trevor Brazile, travel about 150-200 days a year to attend rodeo events. That’s a lot of time on the road—and away from families. It kind of explains why Dawson was drawn to the lifestyle in the first place—given his lack of family roots as a kid. It also explains why he decides to retire from the rodeo ring once he becomes a dad—and falls in love with Sage Carrigan.

The following excerpt is taken from Promise Me, Cowboy, when the heroine, Sage Carrigan, watches Dawson perform at the Copper Mountain Rodeo in Marietta, Montana:

Excerpt from Promise Me, Cowboy:

“And here we have a boy who’s lived just about everywhere, from Reno, Nevada to Denver, Colorado—Mr. Dawson O’Dell. This is Dawson’s first time at the Copper Mountain Rodeo. How about we give him a big, down home welcome?”

As the crowd responded, Sage Carrigan thought she heard a little girl’s high voice cheering over the crowd, saying That’s my Daddy! She turned and scanned the people sitting around her and her family. There were many children on the bleachers but none stood out as the one she’d thought she heard. Anyway, the girl could have been talking about any of the men, from the announcer, to one of the pickup men sitting on the arena fence.

Then the action started and Sage forgot about everything but the cowboy on his horse, racing after the calf. Dawson’s rope was in the air and a second later around the animal’s neck.

Callan, the youngest, disputed. “Sexy as hell. Do you know him, Sage?”

“Saw him at a few rodeos back in the day,” she admitted, her eyes on the action.

In an astonishing short amount of time—just six point nine seconds—the calf’s three legs had been tied and held with a half-hitch knot. The crowd roared in approval, while Dawson clapped the dirt off his hands like it was no big deal. He did pause before leaving the arena though, tipping his hat and smiling at someone in the crowd.

Was he looking at her?

No, someone behind her and to her left. Just as Sage turned, the little girl called out again, “Way to go, Daddy!”

Sage saw her this time. A cutie about five years old, decked out in a cowboy hat and a T-shirt with a red bandana tied at her throat. Sitting beside her was a tall, striking blonde woman in her late fifties, also waving proudly at Dawson. When the little girl called out a second time, jumping up from her seat, the woman said, “Yes, Daddy did good, but you have to sit down, Savannah.”

He had a daughter. Dawson O’Dell had a daughter named Savannah. She had light brown hair and a darling smile that produced deep dimples in her plump cheeks.

Those facts kept circling in Sage’s mind as she tried to process the reality of it.

She sat in a daze for the rest of the tie-down competitors. Exactly how old was Savannah? Had Dawson been married and had a child as well during those months when he’d slowly won her friendship and eventually her heart?

— Thank you, C.J., for joining us today and for that look into Promise Me, Cowboy. In addition, C.J. is offering a copy of the rodeo anthology Love Me, Cowboy, which includes C.J.’s Promise Me, Cowboy and 3 other stories! To enter, simply comment on this post and tell us why you love reading about cowboys. This giveaway is open from now until 11:59 pm CST on Tuesday, Feb 17th. Contest open to US and Canadian residents only. 1 winner will be chosen at random (through random.org) and announced Thursday, Feb 19th in this post. Good luck!

EDIT: The contest is now closed and the winner is Maryh75. Congrats! Please contact my assistant (contact information in the comments) within one week to claim your prize. Thanks to everyone who participated, and to C.J. Carmichael for joining us and offering the contest!