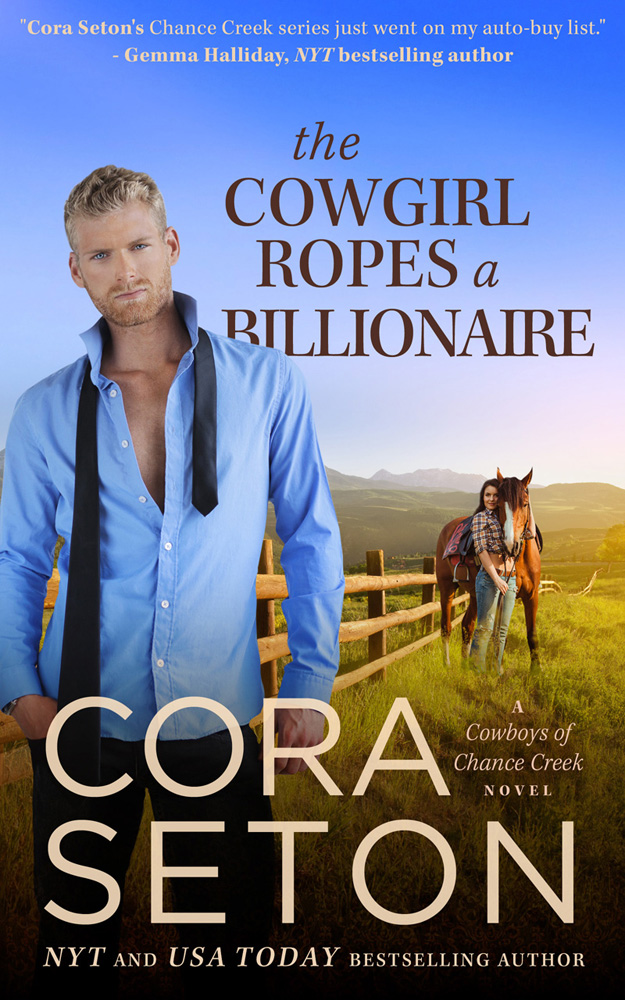 The Cowgirl Ropes a Billionaire (Book 4)

Bella Chatham will lose everything—her veterinary practice, her animal shelter, and even her home—if she can’t find another source of income, fast. So when her best friend signs her up for the hot new reality television show Can You Beat a Billionaire, Bella accepts the challenge and hopes against hope she can win the $10 million prize. If she doesn’t, it’s bye-bye pet clinic and shelter, bye-bye Chance Creek, Montana, and hello to marriage to the billionaire for a year!

Evan Mortimer, billionaire, can’t believe he’s reduced to competing in a television contest to win a wife. Unfortunately, it’s the only foolproof way to secure his position as head of Mortimer Innovations. At least he’ll be able to dump his “spouse” at the end of the year; he’s much too busy to be tied down to a country bumpkin cowgirl.

Bella doesn’t expect her adversary to be handsome—or funny, or compassionate—but Evan’s all three, and he’s proving a tough competitor, too. When they end up sharing a tent—and a sleeping bag—her body betrays her with a longing so deep it cuts her to the core. Still, this cowgirl must stay strong. If Evan uncovers her secret fears, he’ll use them to win the contest, and then he’ll own her for a year. She’ll be out of luck, out of cash, and stuck being Mrs. Mortimer until he kicks her to the curb. Too bad she can’t decide which is worse: winning the show and losing Evan forever, or losing the show and only being his temporary wife.

Evan can’t believe he’s falling for the one woman who doesn’t want him. This cowgirl’s not impressed by his money, his name, or his inability to sleep in a tent with her for an entire night, but every look and touch she gives him sends his desire through the roof. With a director determined to use his claustrophobia to make him look like a fool and an adversary so sexy he can hardly see straight, he’ll need all his savvy to come out on top. Too bad he’s going to lose no matter how this show turns out. If he beats Bella, he’ll destroy the first woman he’s ever loved. If he doesn’t beat her, it’s bye-bye Mortimer Innovations.

Will either of them remember in time that it’s not who wins or who loses, it’s how they play the game that really counts?